I started following the work of Timo van Luijk years ago after learning about him through his collaboration with Raymond Dijkstra. I soon realized that besides creating his own interesting music, that he also ran the record labels La Scie Dorée and Metaphon, and through those, I discovered other great music. Since then, I’ve followed his releases under the monikers Af Ursin, Asra, and Onde, and his collaborations with Christoph Heemann, Kris Vanderstraeten, and others. Without getting too deep into my perception of his music, I’ll leave the descriptions and thoughts to his words. Below is a brief interview conducted via email over the course of the past few months. I encourage you to seek out and support his work. 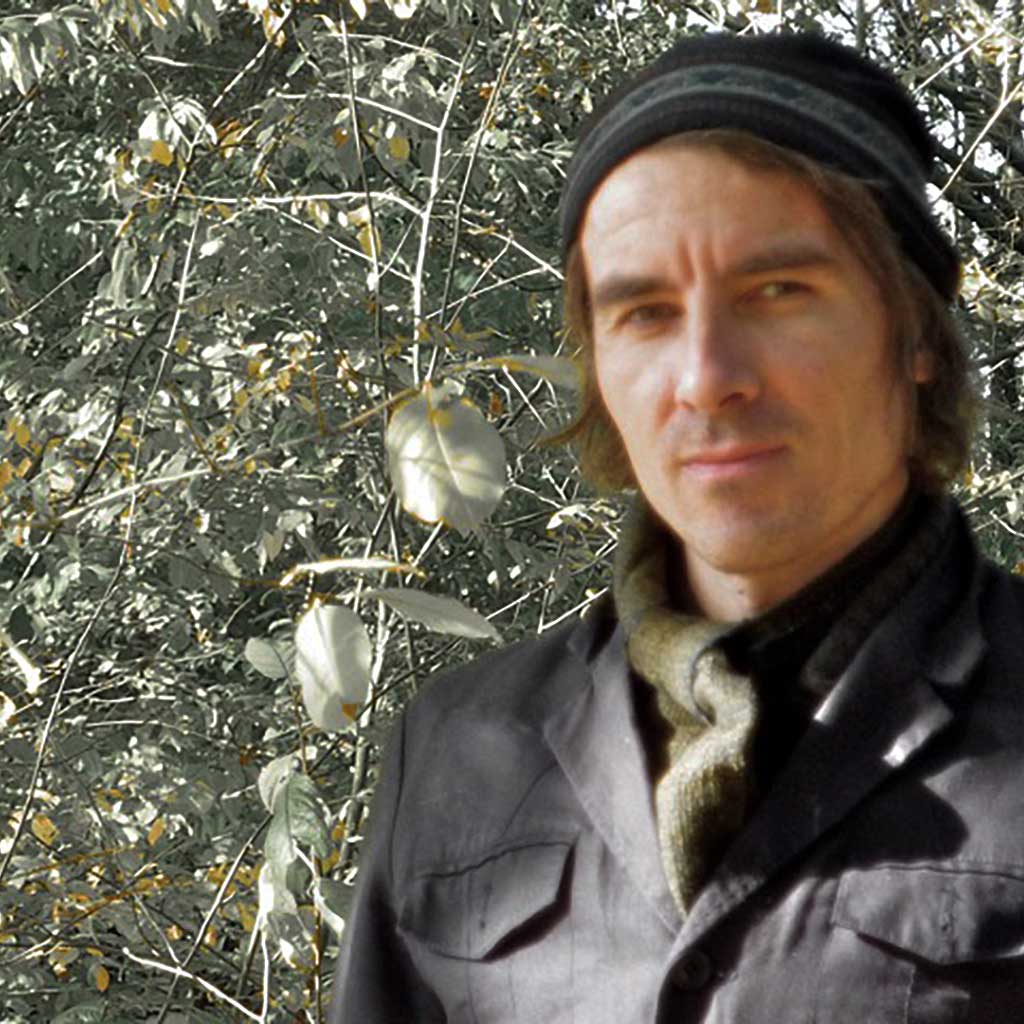 How did your direction regarding sound take form? Did visual art play a role, formal training, etc.?

This has been a distillation of many different mainly musical experiences throughout the years. In my early teens I studied music notation and trumpet but abandoned it after a couple of years because I didn’t enjoy it very much. In the 80′s I was involved in a few local projects that out of deception gradually made me discover new musical forms which I developed in my work with Noise-Maker’s Fifes throughout the 90′s. Around 1992 I also worked as a sound engineer for a couple of years but stopped with it because I didn’t enjoy to spend my time and ears with loud and often boring music and I also was not interested in technical aspects of audio that mostly seemed to be more important than the music itself. It really had an opposite but positive effect on me; I only desired to play music on ‘living room level’ without the use of technical applications. Another aspect that was important to my sound direction was the fact that I had the luck to get a huge collection of abandoned classical music instruments from a music school for a symbolic price. For several years I intensively studied the qualities of all these different instruments in a personal and spontaneous way, without trying to develop a proper technique. As I really enjoyed these experiences I never thought of choosing one single instrument to continue with, in contrary I got interested in creating instrumental combinations more profoundly. This has been a process in constant evolution which is still continuing to evolve.

Since the mid 80′s I have also been listening intensively to various types of free music from which I learned a lot. For a certain period in that time the use of drugs also played a significant role in my perception of sound, visuals and life in general. Furthermore since I’ve been living on the country side for the biggest part of my life the surrounding of nature with its non-cultivated irregular, organic forms also has been a constant important value in my life, thus in my work. These nature elements are also reflected in my photography work, which I have been experimenting with quite a lot since 2002. The last few years I enlarged this field of visual experience to the application of various printing techniques which I’m studying at the moment. All these elements definitely have a valuable correlation with the musical experiences and the other way around.

How do both improvisation and composition play a role in what you do?

All my work starts from pure improvisation; playing music in an intuitive way as a sensual experience without employing the mind. For years I’ve been playing like this almost on a daily basis, often without recording but just as a joyful captivation of the moment, some kind of meditation. That way I concentrated quite intensively on various string, wind and percussion instruments in order to taste and to explore their timbral vibrations and the different moods they can create. These experiences have been valuable moments for me but don’t necessarily have an artistic or musical value.

So to bring everything into a more musically challenging context for myself I started to combine various instruments through improvisation in order to form multitimbral (micro) structures or loose arrangements. Through overdubbing the newly added improvisations become structured because while adding, the previously recorded parameters like time, volume and tone are intuitively taken in account; they become improvised compositions. I find this a very interesting way to work as it leaves the opportunity to interact or react on previously recorded actions, while still keeping the spontaneity of improvisation (which is different from group improvisation where everything mostly happens at once). This way of working sometimes also creates unexpected surprising combinations of sonic twilight which is most exciting.

Afterwards, through post-production, mostly mixing, sometimes editing I try to shape the improvised compositions into a balanced unit, which can also be considered as part of composition. This is generally the process for my solo work as Af Ursin. In collaboration or group situations the way of working is often different, depending on the nature of the project.

With the degree that technology allows anyone to produce recordings, what are some of the criteria that deem projects you do worth pursuing, publishing, etc.?

When I start working on a music piece I have a certain vision of what I want to do, but still I leave it open enough for ‘the heat of the moment’. This leaves place for the unknown aspect or unpredictable directions, either positive or negative. By all means it’s always a challenge to try to capture the ‘right moment’. It’s hard to define what makes a piece satisfying enough for publication but a definite criterion is that the music needs to cause some kind of magic spark, an emotion that lifts it above a mere musical level. This is purely a personal value based on feeling which differentiates it from other recordings I have made. I have plenty of recordings which are interesting to a certain extent but they don’t trigger that little spark of magic and I don’t feel any need to release these recordings at this point. However they might have potential in a later stage when I get back to them from a distance and possibly encounter the missing link.

It’s a positive evolution that it became more affordable and easier to publish music. Anyone can release a record these days which is great but from the other hand through this overwhelming technical ease I sense the profoundness often gets lost or overshadowed by quantity of production. It’s a typical sign of the time where everything needs to go fast in an expanding mode. I prefer to take the time it needs to let an idea incubate and sprout in a natural way as a flower grows from a seed and gradually flourishes. And as in nature some seeds will never flourish.

You self-publish your work (as well as other people’s). What are some of the benefits of working in this manner as opposed to seeking an outside publisher? Is it difficult to balance art and business?

With Noise Maker’s Fifes in the early 90′s we had been seeking for a publisher for more than one year to get our first album released. As there was no interest we decided to do it ourselves. Once it was done it felt quite rewarding. Later on, when I decided to focus more seriously on my solo work it was obvious to choose for auto production, which was the start of La Scie Dorée in 2002. A deliberate choice in order to retain all artistic freedom and to have most possible control in every step of the production process. It feels really good to have that freedom and independence without needing to make compromises. Additionally there has been enough interest to get the publications distributed which also helped to generate finances for future releases. Business and art are opposite activities but they have always been connected to each other, but not always done by the same person. If an artist lives from his work he needs to sell his art somehow which implies business. I think it’s always good to manage ones own work or interest. In a creative period (inner activity) I minimize the business (outer activity) and once a work is ready to be published I don’t mind the business part. It detaches me from the created work and somehow brings me back to social life while the creative part is much of a solitary activity. In my case the business is quite low profile anyway so it remains limited. But as said it creates more independence which has always been important in my life. Of course I’m still depending on distributors to get my work distributed which is less obvious these days because of economic recess, overproduction, increasing postage cost etc. From the other hand, with growing internet facilities, people can order directly from the artist which is a natural and positive evolution. In the meantime I have the habit to work this way and I’ve hardly worked with an outside publisher apart from a few occasions which left me with mixed feelings but it would be nice to do that more again in the future. I feel confident with the offer of Robot Records and United Dairies to get my first albums rereleased on CD probably later this year.

With the artistic direction you’ve chosen, what do you hope listeners/audiences take away from it?

I never really considered this. Once a work is published, out of my head and out of my hands it will lead its own life anyway. Listening is always a personal subjective matter so everyone will have his own experience which is great. But of course I hope listeners will enjoy the music and its physical presentation or even better that they will perceive a magic spark transcending the music. For live situations it’s more or less the same, I appreciate to get sincere feedback which is always constructive to future development.

More information can be found about Timo’s music and record labels at www.lasciedoree.be and www.metaphon.be.

Previous Interview with Lubomyr Melnyk
Next Presentation on Listening