After seeing Wittmer + Knowles, I still find myself thinking about what their performance was like – how physicality played a role, as well as sound, light, space, and other elements. It was surprisingly captivating – not from a judgmental sense, but that after it was finished, I literally found myself “feeling very good.” It was a peculiar experience, and I was glad to have the chance to talk to them more about it, and things in general, once they got to relax.

The following questions were sent to them via email, and were answered once they returned home from the tour. I hope their answers inspire you to seek out more about them, and by all means, be sure to attend if they come through your town in the future. 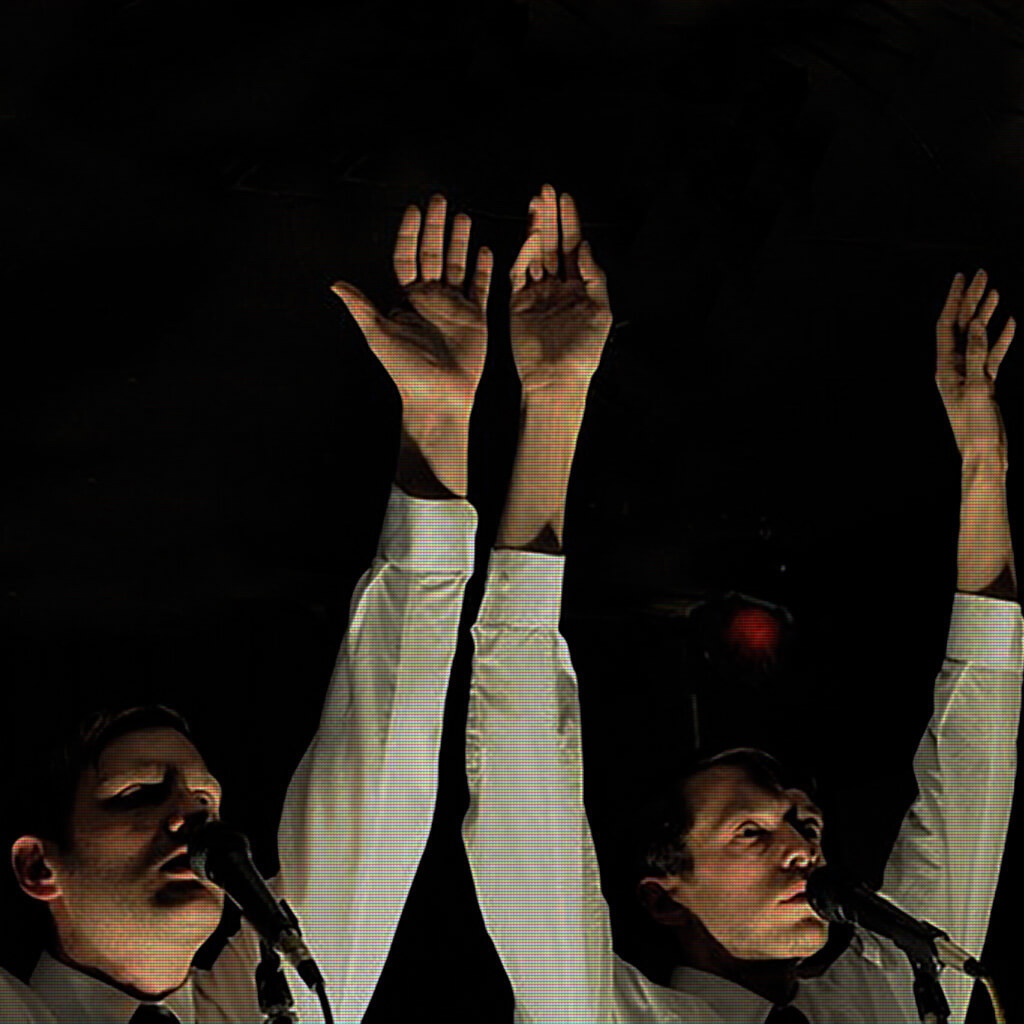 Recordings, tours, performances, what’s the point of it all?

Gerritt Wittmer: The desire to create and share. To realize and execute an idea and share it to all who want to receive brings a level of satisfaction that is difficult to obtain any other way. To meet and gather with so many souls and to touch and exchange energy is just so incredibly powerful.

Paul Knowles: To share our experiences and creations with as many people as possible. To hopefully open minds, entertain and help people consider a different possibilty, different potentials of reality. Also, to receive feedback and learn more about myself and my creations through the perceptions of others.

What’s your background in music, and how did you arrive at your current relationship to it?

GW: I have a degree in audio eng. Have been performing and releasing noise/sound art since 98. Really coming from that scene, and in the past year or so have really gotten into the performance art side of things. For years my main focus was sound only. I reached a point where I really needed to do something different for myself. I no longer desired to be a guy sitting at a computer or what have you. Don’t get me wrong, I am still very focused on sound and I think a show should hold its on purely with sonics, but now i really want to physically perform for the audience, and hopefully give them something deeper.

PK: From the beautiful complexity of classical music , the simple entertainment of the Chipmunks singing the Beatles songs and the wonderful parodies of weird al yankovich that i was exposed to as a child, through the raw energy of glam rock, gangster rap, nine inch nails and then techno i experienced as a teen and finally indie rock as a young adult, my musical influences have been many. Always have i been attracted to energy, repetition, novelty and humor in a song. I was only turned on to noise in the last few years and after seeing several powerful live shows (deathroes in particular) only then did i consider performing this style myself.

As a child i learned basic piano skills. In my early twenties i learned how to dj techno and hip-hop, took recording and electronic music classes at city college in san francisco. I slowly ammassed a range of gear by my mid twenties and began recording and teaching myself guitar, bass, drums, etc., yet only enough to record songs i had kicking in my head, for I am no musician, i am a song writer. I can’t sing but love too. Often when trying to make a straight techno, dance or hip hop track i would quickly tire of the standard formula and diverge into experimentation. I had made much “noise” before i even new of the genre and scene.

My experiences playing music in bands and performing on stage in theatrical play acting was easily adaptable to noise performance. The attention to sound or the musicality of the sound, improvisation and stage presence all attracted me to, and still excites me about, Noise.

What’s the experience of your performance like for you?

GW: The two pieces we just toured with (The Great Work! and The Silver Cord) are both extremely draining to me as a performer. Esp. night after night, it requires a lot of energy and focus. I imagine to some people it seems like where just staring at each other and doing nothing, this is far from our reality. Mentally we really do a lot and to turn that on night after night, in so many different physical spaces with different minds and energy, wow!

PK: When a person is playing bass, they are “playing” a bass player. when a person is playing tambourine, they are being the “tambourine player”. This stuck me when playing with a garage rock band, the roll of each musician as a performer executing that roll for the audience. The audience expects drumsticks to be twirling on the drummers hand between songs, sting players heads bobbing to the rhythm, etc. The musician fullfilling a roll as a PERFORMER. You are being a bass player on stage, not just playing the bass, you dig?

Noise, and the work gerritt and i do, is very performance based, crossing the line between strict underground harsh noise scene fare and gallery quality performance art. The two terms are equally alientating to different mindsets, so i find it hard to use one or the other or both to describe our work.

At what point do you separate your hand in the mix from outside interpretation? How important is what portion you prefer to retain control over, and why?

GW: So these pieces are very intentional, down to many many little details. All of this together adds to create this abstract narrative. This is all very crucial, but to what extent the audience participates is totally uncontrollable. Does anyone notice the details? What do they think these pieces are about? What do they take from it. Thats the real beauty, the open interpretations, and different experiences that are taken from our performance. I had a great time listening after shows to what people had to say, sometimes an audience member would say something to Paul or I and we would just be blown away with a new angle, maybe that we had not considered, and it really just adds to fuel the whole thing!

PK: Immediately. When i have done what i have done, with any form of art, it ends when i have done it. Of course if the “piece” extends beyond me into the audience then it countinues until their input is fed into the piece. I feel the control and input Gerritt and i have into these pieces is very important and creates a power, a space, a FORCE that is in itself an entity that the audience interacts with. The audience in inherit in these pieces, without them they would be simple exercises of ourselves. But the people being there, with us for the duration and being forced to experience and interact, whatever the outcome may be, is what makes it important. It was so wonderful during the entire march 2010 US tour to see consistent responses from those who witnessed our work. Truly satisfying.

More info can also be found here and here.

Previous Presentation on Listening
Next Interview with Richard Skelton