Mike Rohde is a designer, sketchnoter, and writer who lives in Milwaukee. Around the time I met him, he was becoming very active with his sketchnoting practice, which is using illustration as a form of notetaking. I was the organizer of Milwaukee PechaKucha events then, and invited him to present on the process of sketchnoting. We stayed in touch thereafter and would occasionally meet to discuss ideas on how a book might develop from this work.

At the time, I viewed Mike’s work purely as a note taking method. Perhaps even one that was just meant for him to produce and share, sort of like a strange new type of art. But Mike saw it much further beyond that. Eventually, he did get that book deal, and we continued to talk. It was during this time that I realized something I hadn’t before: Mike went through the same process with common notetaking as I did with common drum playing. Both of us sought to personalize the craft somehow, based on our own experiences and perceptions.

Mike and I talked about this, and we both had that ‘aha moment’ that this was an important idea to share. At the time, he and Brian Artka were making a series of videos for the book, one of which involved Mike sketchnoting a live event. He invited me to be the speaker at that event, and share the process that he and I had discussed. You can see this talk, and Mike’s sketchnoting of it, in The Sketchnote Handbook (video edition). Both the standard and the video edition delve deeply into what sketchnoting is, how it can help us think and process information differently, and how that information can be understood more profoundly when reviewed. Very interesting stuff. The good news is, you don’t need to be an artist or illustrator. Anyone can do this.

After reading the book, and thinking more about the ideas we discussed, I sent Mike some questions to post here. Here they are, with his answers, which reveal more about Mike’s process and how he came to sketchnoting. 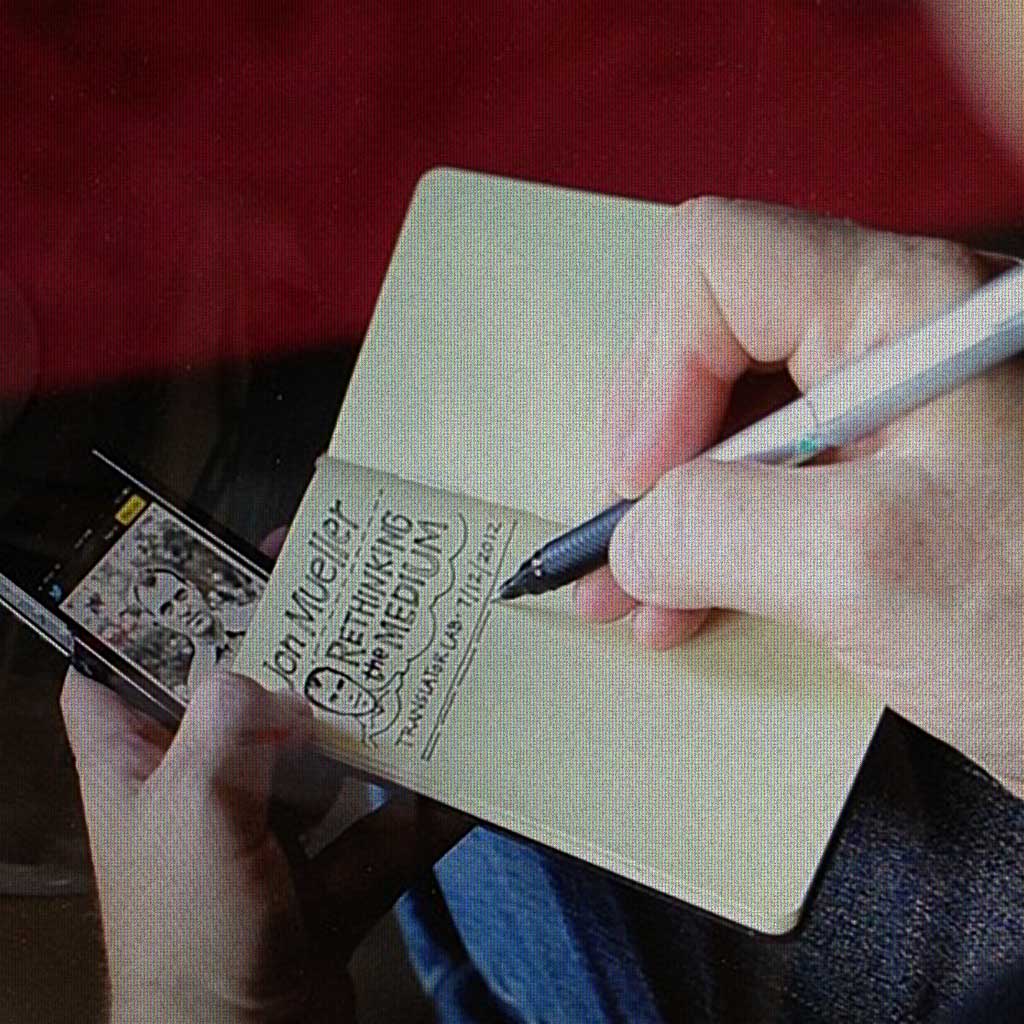 What was your involvement in illustration like as a child – how did you think about it, how did you use it, and how did it effect you?

That’s a funny question, because as a child I had no idea what the word “illustration” meant. I’m sure I read and heard that word, but never considered it what I did. I called what I did drawing, and I did it all the time. Looking back, I used drawing and illustration as a way to express myself and to create the things I wanted to create. I have memories of creating my own newspapers, writing the stories and drawing all of the imagery. I made hundreds of comic books too, created for myself and my friends.

I think the closest I got to illustration in my youth was the poster company I ran one summer when I was 12 or 13, influenced by Hal Roach Studios and their crazy hot rod t-shirt illustrations. For some reason, those Hal Roach images resonated with me so much, that I drew my own versions, based on the images I saw in the pages of the comic books I read. Of course I had no means for printing t-shirts, so I had an idea for creating posters by hand with the paper I had on hand.

My little business started in the summer, because I had free time after school. I created all sorts of posters, featuring my illustrations and sold them. I drew all sorts of images — cars, superheroes — whatever I or my friends had interest in and would sell. I even took on custom poster commissions! I remember displaying my work in the windows of our basement apartment in Chicago, selling these posters for pocket change to friends in my neighborhood. It was a wonderful experience creating things I enjoyed making, selling them to friends who were excited about buying my hand-made creations.

At the end of the summer I’d made maybe 10 dollars from the business, which was an outrageous amount for kid my age. The best way I could imagine celebrating my windfall was spending a portion of it on food and candy for my neighborhood friends, who were the very ones who spent money on my posters! I can see how that blend of illustration, joy of sharing, business and community are still at the core of the work I most enjoy today. It would seem I’ve come full circle.

Do you ever sketchnote in reverse, meaning, do you ever send messages in illustrated form, etc.?

That’s a great question. I do use sketchnotes to both capture and share ideas. I’ve been experimenting these last few years on pushing the medium beyond just capturing ideas live at meetings or conferences. For example, I’ve enjoyed creating travelogue sketchnotes. That’s where I capture my experiences during my travels using the same sketchnoting techniques as I use to capture presentations — writing, hand-lettering and drawings. I find those travelogues valuable, because when I see them years later they still evoke memories — including deeper memories I hadn’t even recorded in the sketchnotes.

I’ve also applied this concept to food — at several restaurants in Austin, Texas during SXSW Interactive, in Portland, Oregon and my favorite example — Chez Panisse in Berkeley, CA. In my food sketchnotes I capture the enjoyment I’m having around the food in visual and written form, which captures rich memories from the experience. It’s fun way to capture and share experiences.

Having these sketching skills has helped me draw concepts to get my ideas across in my work as a designer since the start of my career 20+ years ago, so the idea of expressing ideas with sketchnotes is a natural one. Now that the book has been out several months, I’m excited to see readers of the book taking sketchnotes into new areas they’re interested in — using sketchnotes as a sharing tool and a capture tool.

I’ve already heard from an attorney who uses sketchnoting to present information, and a physician who uses the approach to explain medical causes and symptoms to patients. I love seeing readers inspired enough to explore and improvise.

Describe your process of listening when sketchnoting a public talk or event. How do you balance what’s missed vs. what you can add conceptually?

My approach centers around the idea of listening intently for concepts and ideas that seem important and relevant to my interests. Because sketchnotes are first of all personal, my goal has always been to take away the gems of each talk so that I can understand them and integrate them into my life.

I always start by capturing the name of the speaker and the topic of the talk, so when the talk begins, I have that out of the way and can focus on what is being said by the speaker. I like to listen for clues from speakers that set expectations about what is to come. Good speakers seem to do this, which helps me plan loosely for where the speaker will likely go. This is important, because once I know general direction, I can start listening for gems of ideas to capture and place into my sketchnotes. Speakers who don’t set expectations early in a talk can be tougher to follow and structure. In those cases, I simply go with the flow and capture whatever gems come along, worrying very little about how to place those within any structure. In the end, capturing the ideas has to take priority over a logical structure. As for knowing what to capture and what to less go of, that’s tougher to describe. In fact, I’m planning to start teaching workshops on sketchnoting and I think my defining how I determine that will be great teaching material for advanced techniques in that setting.

If I were to try now to describe it though, I would say it’s a bit like tuning an antenna to certain ideas. When I hear an idea that resonates, I capture it, and if it doesn’t resonate, I let it go. I think part of that process is my expectation of a talk when I research it, or the pre-conceived notions I may have coming into a talk that help me decide what resonates and what doesn’t. All I know for sure is that when something comes along that resonates, there is something in me that says “get that” and I try the best I can to get it down.

Another aspect is determining how much detail to capture. Often if I feel I have captured an idea sufficiently, I may stop capturing and just listen. This is often the case when someone makes great points and then either rambles or explains an example. It may or may not be something worth recording, so it really depends on space, and my own value judgement on the idea in detail that determines if and how I capture it.

Have you ever been confused by looking at old sketchnotes? Have they ever taken on different meanings from the time you made them?

I haven’t been confused by my old sketchnotes, but I would say there have been times where I had to pause and recollect the context and then the ideas come flooding back to me. I have had cases where I captured a sketchnote in the past and when looking at it again, with more information or an experience that enriched my thoughts about a topic, a sketchnoted idea became more relevant or changed in my view. I think that’s an interesting part of sketchnotes — they capture your thinking at the time. I suspect if I did a thorough review of every sketchnote I’d made, there would be things I’ve definitely changed my mind on since they were created.

What if the talk or event you’re sketchnoting isn’t very interesting, how can sketchnoting create more meaning when not much exists?

As much as I can, I try to avoid explicitly boring presentations, but they do slip in there at times! As an example, I was recently in a meeting where I just wasn’t engaged when sitting and listening. In fact, it was mid-afternoon and I was a little sleepy. I had a notebook and pen along, and thought to myself “I’m not super-interested in this discussion, but let’s see if sketchnoting it will engage me and keep me from nodding off.” and I did. I actually became more engaged once my hand and mind and ears worked together, learned much more from what was being said and didn’t nod off. So in this instance, the act of moving and processing and capturing added a dimension to the presentation that wasn’t there when I was passively listening.

I have also seen sketchnotes either verifying to a presenter that their theme or message was or wasn’t clear from reading my sketchnotes. So in that sense, even a boring meeting that’s sketchnoted can bring a level of value to at least the speaker.

In your experience, how do pictures tell things that words don’t?

For me, images that I draw capture more of the experience. I can do that to a pretty high level with words I write, but images for me at least are above that descriptive level. In a way, I can at times feel trapped or bound by words and language. For instance, how do I describe the indescribable? At some point words fail. I think images and drawing add something more — of course images fail at some point too, but provide a mapping that is different and I think complimentary to words and written language. When I do both, that’s most powerful.

I was honored to take part in all this, and the thoughts the book inspired will stay with me for a long time. Hopefully it will provide a similar experience for you too.

Previous Death Blues Manifesto
Next The Power of Play 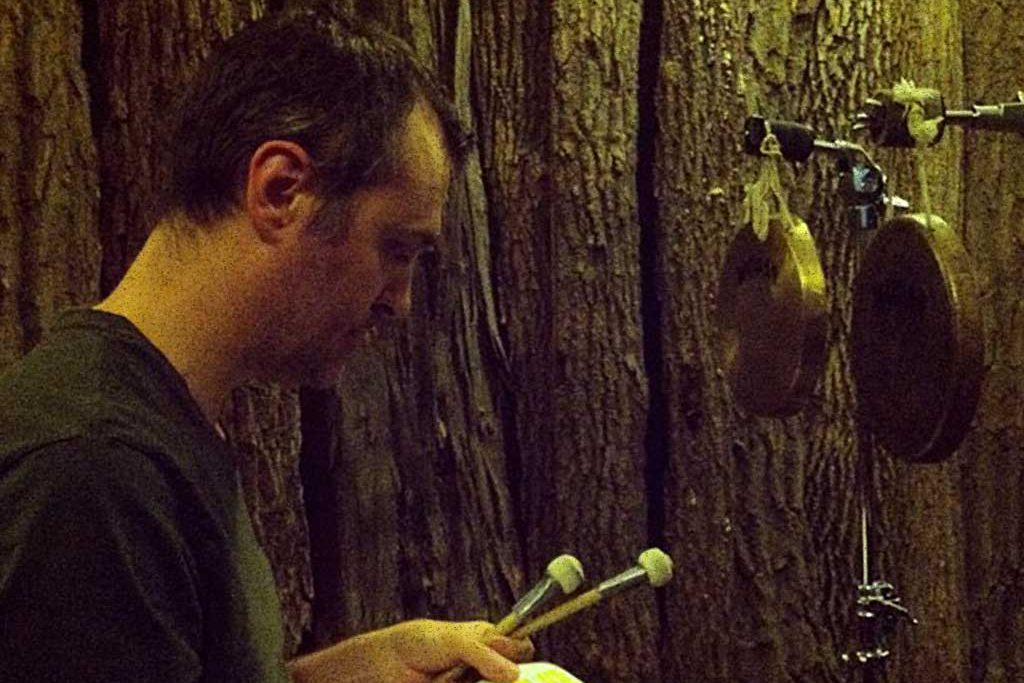 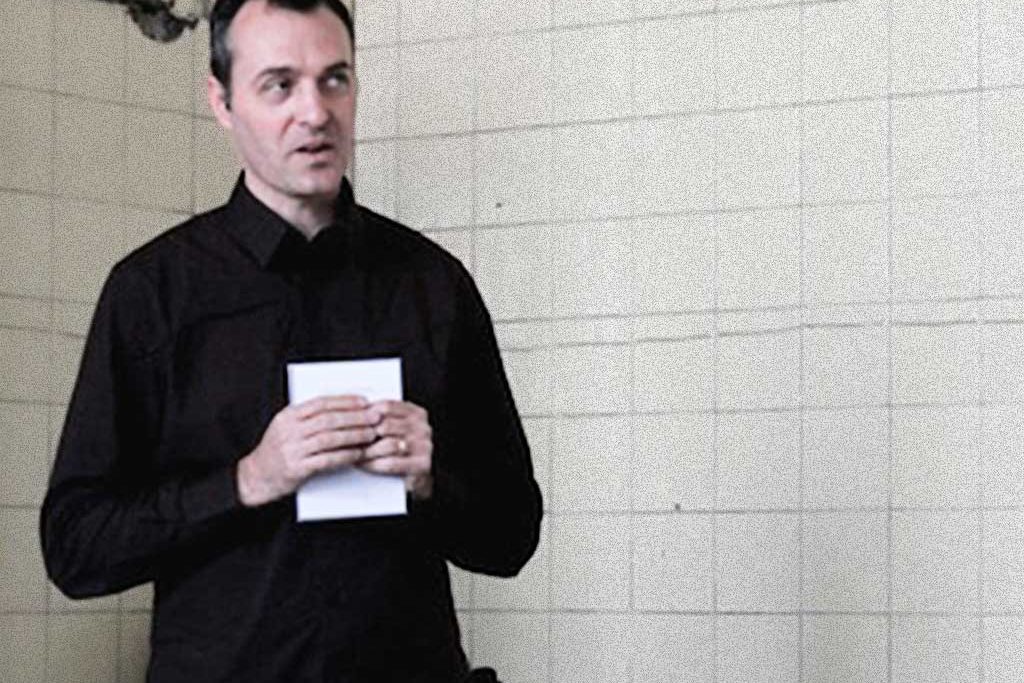 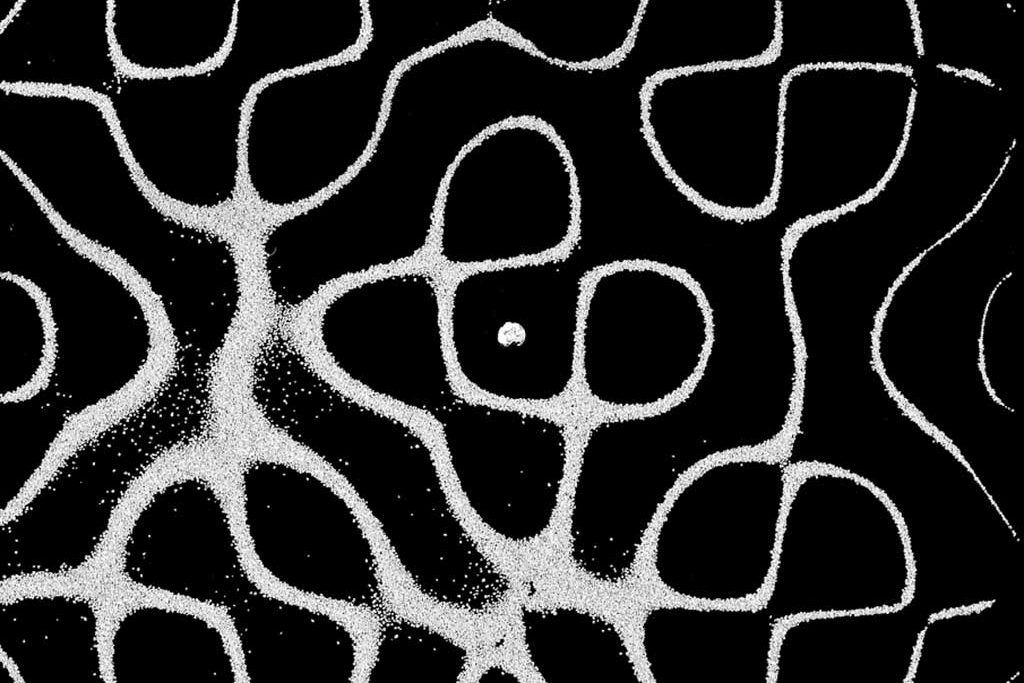