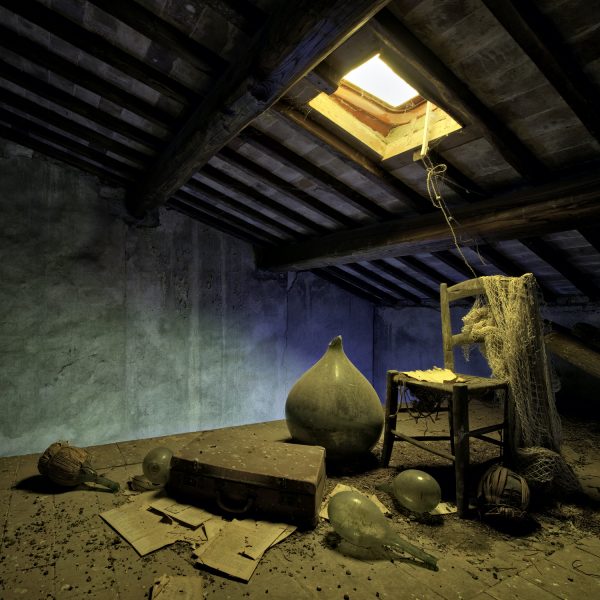 Digital, LP and CD editions released by American Dreams Records are available at the Rhythmplex Bandcamp page. Includes unlimited streaming via the free Bandcamp app, plus high-quality download in MP3, FLAC, and more.

“Wisconsin musician Jon Mueller is inquisitive. Open to pushing his experience and his limits, he’s demonstrated the many sides of himself both as a solo performer and as a key member in mind-bending projects like Mind Over Mirrors, Volcano Choir, and Death Blues, or by running his shop of curiosities Within Things. On his new four-piece collection Family Secret, the experimental musician maintains a meticulous, sustained tension, re-engaging with a technique he developed as an adolescent – reframing the environs of creation, and naturally altering his perception, through changes in light and space – while also considering the role of family and divorce.

In 1990, while in college, Mueller began experimenting with lighting in his home in order to create new homes, and in some circumstances new Muellers. He explains – “One day I came home and went straight to the bathroom, turning only its light on. I noticed it lit up the space in a dim, ambient way. Each day after, I’d come home and experiment. I had previously turned on the kitchen and living room lights, lighting everything brightly, but alternate sources inspired me to imagine living in a different place – even a better version of the place where I lived. I imagined different personas, characters that might inhabit these new environs and moods.”

This technique reared its head once again on Family Secret with Mueller writing, recording, and editing under various lighting conditions, leading him to almost hallucinatory states. And while engaging with this old technique, he began engaging with the past, especially his family – “the titling, approach and mood of the record have much to do with the nearly occult effect that various divorces in my family have had in my life,” he explains, cryptically. “Unearthing heavy mysteries can be revelatory and haunting.”

From “Whose Emptiness,” the blossoming first composition on the album, Mueller employs texturally rich percussion – gongs, drums, cymbals, singing bowls – to envelope. Passages of airy, reverberated treble frequencies float atop a bed of deep rumble. Gentle, metallic bellows fade in and shifting timbres immerse the listener, each wave of sound folding atop the previous. Mueller has created a room, or at least an enclosure.

To add to the album’s exploration of habitat and family, Mueller tapped Dutch photographer Niki Feijen for the cover. Feijen’s mysterious photos of abandoned places – from collapsed residential interiors to cracked church walls to Ukraine’s Chernobyl – evoke a timeless, clandestine sensation that matches Mueller’s probing artistic process on Family Secret. Suitably, Family Secret is surreptitiously enticing and intimate – a house with room for one more. From the short, sweet drone nugget “Ignited Hands” to the brooding closer “Welcome,” the album invites and then holds captive. Why not stay? You’re already home.”